2019 Master Plan Survey of Residents
The Final Draft of the 2019 Town of Westfield Parks and Recreation Master Plan can be found on the Westfield Township website.  It is a 512-page document, only a tiny fraction of which relates to Brightwood Park. A survey of Westfield residents was conducted by the ETC Institute a specialist in designing surveys that are statistically valid. (Without getting too far into the weeds, what this means is that although only 583 Westfield households completed the survey, the survey results legitimately speak for all Westfield households. 583 may seem like a small number, but ETC would have achieved statistical validity with only 400 responses, so the results are rock solid.) The ETC survey results can reasonably be regarded as the voice of Westfield.

Facilities that are Most Important to Holdholds 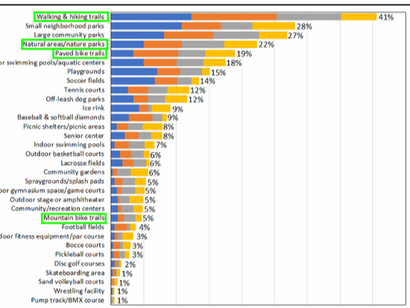 Survey respondents were allowed to specify up to four items they regarded as most important.  This chart shows the percent of households including an item somewhere among their top four, broken down by the order of importance. 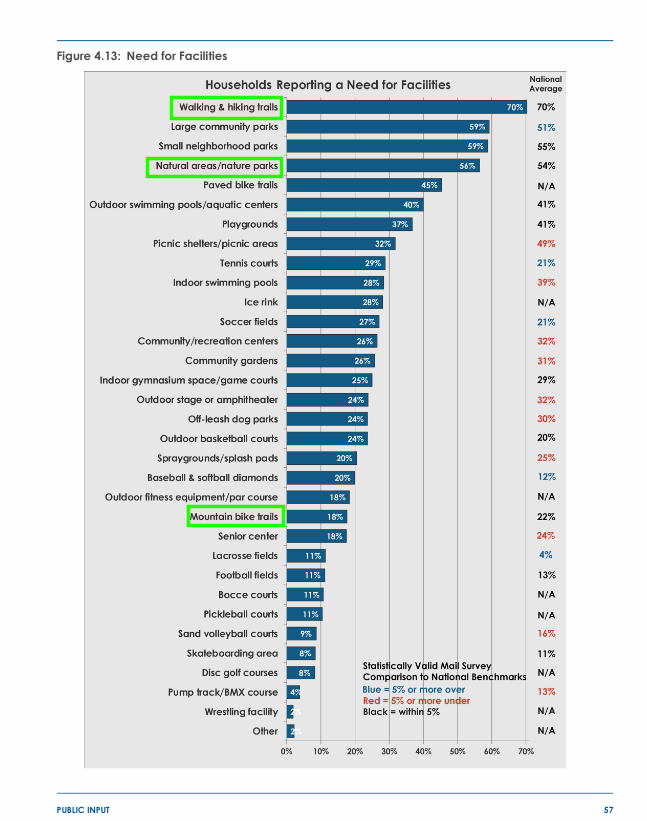 The survey company combines the Importance results and the Unmet needs results to produce a single Priority rating. This makes sense. If a need was regarded as very important, but already fully met, it wouldn't be something the town would have to do much about, except protecting it from adverse effects of other actions.

The Priority Investment Rating (PIR) [click on the link for a full explanation] was developed by ETC Institute to provide governments with an objective tool for evaluating the priority that should be placed on parks and recreation investments.
​

Based on the PIR in the survey, walking trails, paved biking for transportation and natural areas should be designated High Priority for Westfield and mountain biking should be considered Low Priority
​ 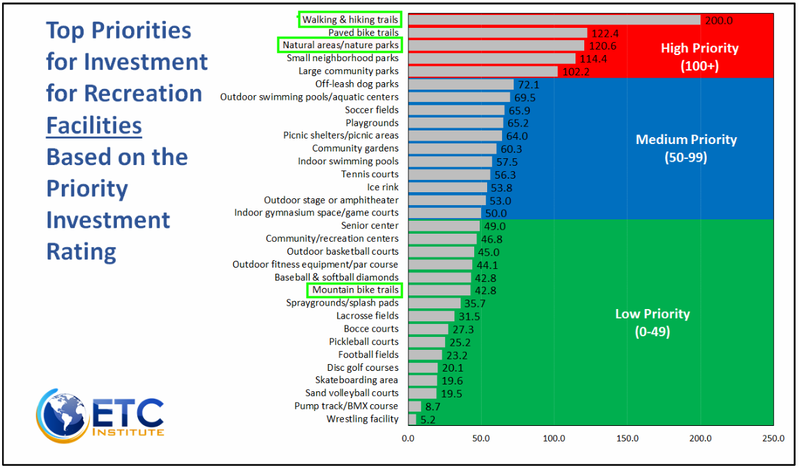 Given the results from ETC Institute's rigorously conducted survey, there are grounds to wonder why mountain bikes trails would be allowed to replace the natural areas of the Brightwood sanctuary. Look at the PHOTOS section of the website for some of the things hikers (whose priority rating even exceeds that of nature parks) might want to see in Brightwood. Nobody goes to Brightwood hoping to see a mountain bike. But if the trails go in as planned, they will be seen in every direction.

The decision to ignore the survey results is largely due to the influence of JORBA, a statewide mountain biking advocacy group. They managed to get appointed to a group of stakeholders responsible for turning the survey results into the Final Plan. Why they, as opposed to a group representing high priority survey items like hiking or nature parks or paved bike trails has not been explained.

We Would Love to Have You Visit Soon!