Letters to the Editor

Many residents and nature enthusiasts have become alarmed about the loss of a quiet natural area if competitive mountain biking were to be introduced in the park.  Here is a sample of letters written on that subject.

Dear Mayor Brindle, members of the town council and citizens of Westfield,

Please reconsider your plans to put a mountain bike path in Brightwood Park. The park may be underused by people, but it is not underused by nature. If you read “The Hidden Life of Trees” by Peter Wohlleben you will learn that trees like us, live in communities. They are very social beings communicating through scent and their roots. They provide shelter, shade, food, oxygen and control water runoff creating a sanctuary for migratory birds and other wildlife.

We have already destroyed much of the natural world in the suburbs, replacing it with grass and ornamental trees and shrubs, creating sterile environments. A mountain bike path could destroy habitat, drive out birds and interrupt the quiet solitude of a rich ecosystem in the middle of suburbia. Can’t we please leave one piece of nature to itself?
In the book “Outside Lies Magic,” by Harvard Professor, John Stillgoe, we read about seeing in new ways and enriching our lives unexpectedly. It is about the art of exploring. Exploration encourages creativity, serendipity and invention. Walking the trails of Brightwood Park provides the benefits of escaping from the confines of our programmed lives. Today we need this solitude more than ever.

I propose an alternative way for the people of Westfield to use the park. It is the perfect place to teach our children to respect and reconnect with nature. Schools could use the park to teach art, science, biology, horticulture, botany, primitive skills and conservation.
Maybe the town could partner with an organization to mentor us in the best way to use this hidden gem. After all we are here on earth for such a short period of time. It would be nice to give back instead of always taking. We should preserve what remains of the natural environment for the next generation.

Letter: It Would be Truly a Shame to Abandon Brightwood Park as a Nature Preserve

​Submitted to Westfield Leader,October 19, 2020
​
First and foremost, I would like to encourage Mayor Brindle, the Town Council and Recreation Committee members to give careful consideration regarding their decision to the development of a Mountain Bike Course in the Brightwood Nature Preserve.   As memorialized on the boulder at the entrance to the park, it states,“ This area is dedicated to Noel Taylor to honor his many years of devoted service and work in establishing this quiet sanctuary so that children of Westfield will FOREVER have this natural land to cherish.”

The quote reads, “Man and All other Living things MUST learn to live TOGETHER.” Dated: 1993 – NOEL A. TAYLOR

One can only surmise the joy this natural sanctuary has brought to all the people that have passed through it, but also for all the flowers, fauna and animals that have made it their natural habitat.

However, I am thankful that our representatives have finally decided to do their due diligence that such an issue requires, PRIOR to any vote.

My greatest fear is what the Mountain Bike Course will look like after a few years.  We will not be able to get the Natural Sanctity of the Preserve back.  Additionally, the Mountain Bike Course, which JORBA markets as  “Multi-Use trails” will most definitely displace the Naturalists, walkers, hikers, and bird watchers, not to mention the animals that have made this park their habitat.

Brightwood Nature Preserve is in much need of attention and the  Friends of Brightwood are committed to this well deserved cause.  Finally, there has been much talk about how important “Preservation” of this Town’s historical culture and character is.
It would truly be a shame if Westfield’s representatives chose to abandon Brightwood Park as a Nature Preserve.

As many Westfielders know, I’m a physician who retired from clinical medicine in 2015. My office was on South Avenue next to the Party Stop.
I’m a member of “Friends of Brightwood Park” and share many of the members’ concerns regarding preservation of this beautiful nature preserve.
But I’m perhaps more concerned about the high incidence of serious injuries associated with mountain biking than I am about the aesthetic issues.
I strongly suggest that you all read this article (click here if you are reading this electronically ). There are many more like it.

What if there is a storm and a tree blocks a trail beyond a blind curve, resulting in a collision and an injury.
​
Read the truly scary statistics in this scientific abstract about spinal cord injuries associated with mountain biking  .

Young riders, who, by the nature of their youth, feel invulnerable, may not take a slow trip around a path to make sure it is safe before using it.
Is the town going to be responsible for clearing the trails immediately after every storm to prevent these types of accidents?
Apart from the liability issues, does the town want to bear the guilt of approving an activity that could, some day, lead to a Westfield teenager becoming a paraplegic?
Just do a Google search on “Injuries Associated with Mountain Biking.” You will find it very illuminating. 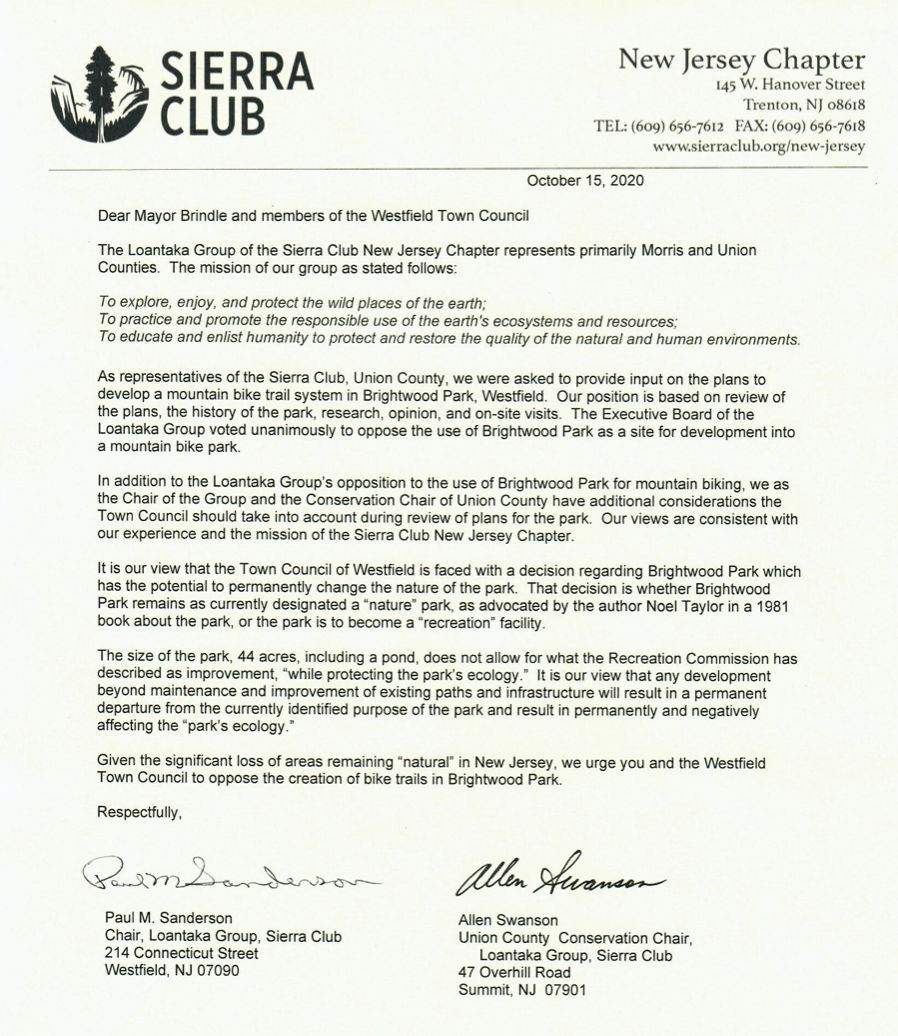 Letter: Do Not Allow JORBA to Build Trails in Brightwood Park

​October 5, 2020
Do not allow JORBA to build trails in Brightwood Park.  JORBA says the trails would be designed and built according to IMBA standards. This would make sense if the town wanted a mountain bike course. Bicycle trails and multi-use trails are not designed in the same way as mountain bike trails. The guidelines and specifications for these trails fall under AASHTO, The American Association of State and Highway Transportation. They set standards for design, signage and construction.
We have all heard the words “bike trails”  or “multi-use” trails when referring to this proposal. In fact, there remains confusion around what exactly JORBA would provide. Regardless of whether they are called “bike paths” or “multi-use trails” it really is a mountain bike course, designed for mountain bike riders to enjoy. JORBA is an advocacy group, granted the privilege of having their voice heard during the Master Plan survey.  A mountain bike course is ideally designed with difficulty, incorporating jumps and twists.  They would be sloped to increase speed. These design features only appeal to mountain bikers and pose safety risks to other users. All of the exciting and fun aspects of mountain biking are exactly the same aspects that frighten all other users. Speed, times, and difficulty of course does not equal kids riding their bikes.  JORBA claims that the riders will go only 4-5 mph. Already high speeds in Brightwood Park up to 17 mph have been posted on the Strava website. Fast speeds mean bad encounters with other users. Mountain biking would create conflict with all other park users and force all other users to stop enjoying the park. It is inappropriate for one user group to influence the fate of many, and prohibit them from using public space. Establishing mountain biking trails doesn’t explicitly prohibit other users or bicyclists from using them, but in reality, it would be nearly impossible to do so.

Westfield is considering making changes to Brightwood Park. There is a constituency that wants to add paths for trail bikes, having failed to get them approved at other area parks. Some feel that the Park is currently “underutilized”. The number of people using a park is not the only measure of its success. A better metric might be, “How does the park contribute to the surrounding community?”

I value Brightwood Park for its extensive natural habitat. It is unique in offering the ability to take a quiet walk, maybe crossing paths with birds and other wildlife, sharing the experience with joggers and fami- lies with dogs and strollers. It offers a chance to escape the noise of the city – cars and lawn mowers and leaf blowers – and imagine how Westfield looked and sounded 50 years ago.

Several decades ago, I joined some people doing trail maintenance in the Watchung Reservation. Much of the damage to the trails, and to the eroding slopes beside the trails, was from riders who couldn’t resist leaving the trails for the thrill of charging down a steep slope. I have no doubt that most of the trail bikers were responsible actors, staying on the trails as requested. But the minority who misbehaved were causing outsized damage. There was no obvious way to limit trail cycling to those willing to behave. It was easier to ban trail bikes altogether. They did. I don’t believe it is possible for bikes and walkers to share the same paths without destroying the tranquility that is unique to Brightwood. Dogs and strollers and slow-moving walkers are not compatible with fast-moving bikes.  Just this week, a few minutes after I had watched a deer go by, I encountered my first trail bike in the Park. I heard the bike crunching down the gravel path 50 feet behind me. I thought it might have been a main- tenance vehicle of some sort. It was the loudest sound I have heard while walking through the park. Not motorcycle loud, but still obtrusive. If bike paths are installed where there are no walking paths, this must displace and disturb habitat that is currently home to the wildlife in the Park.
There isn’t much undisturbed habitat left in Westfield, and as it is removed, the wildlife that used to live there will be forced out. For many of us living near the park, the plant and animal diversity it supports is of value, even if we never set foot in the park.  Proximity to this quiet space may have been a factor in choosing to live in Westfield. Not all parks have to be all things to all people. We have parks with playgrounds, parks with playing fields, parks with restrooms, parks with barbecue grills, parks with easy access to snacks. That Brightwood lacks these “amenities” is not a problem, it is a feature. If you have an opinion on this, particularly if you already use the park, contact your Westfield council members at westfieldnj.gov.
John P. Linderman,  Westfield NJ