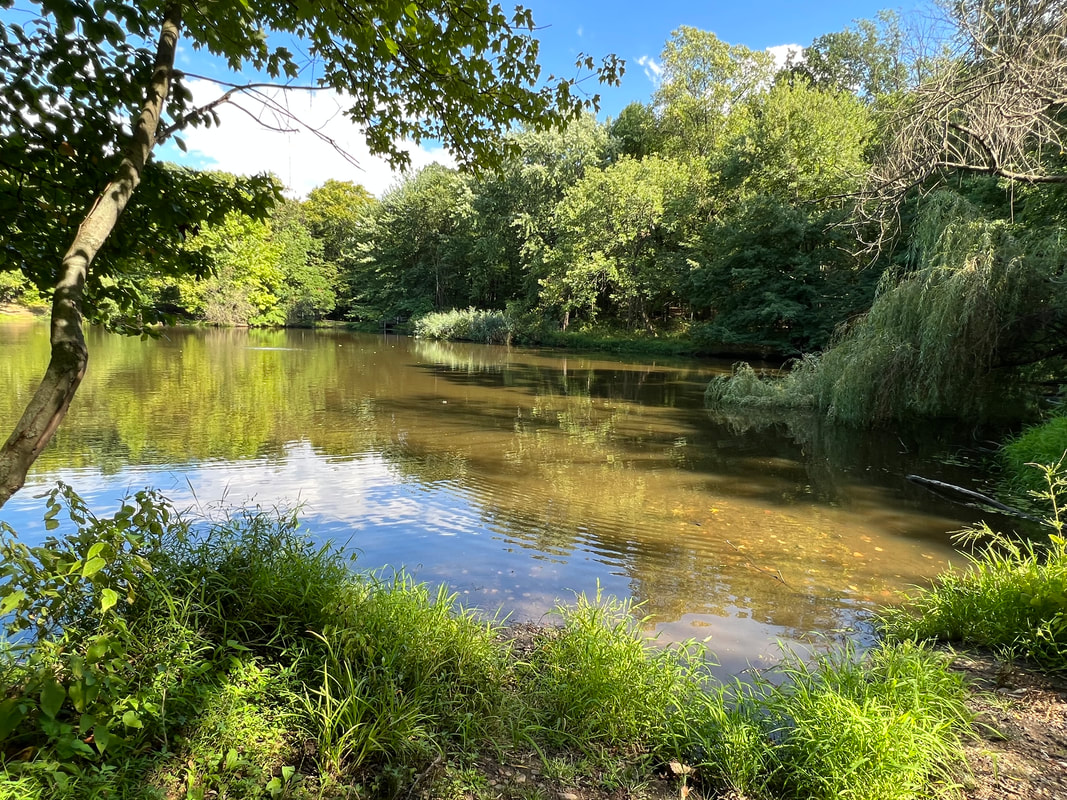 The Good, the Bad, and the Challenging...

First the good news:  Anyone walking in the park this summer must have noticed the improved water quality in the main pond.  The town's pond contractor has been monitoring the water and treating as necessary on a regular basis keeping the duckweed and algal boom at bay.   Kudos to the town administration for opting for a proactive contract!

Now the bad:  Construction performed on Madison Avenue earlier this year without proper silt fencing caused significant run-off into the ponds.  Coupled with the drought conditions, the smaller pond has become more of a  marsh.

A challenge facing the pond is the spread of phragmites australis.  This aggressive non-native plant will spread and outcompete native plants if left unchecked.  It grows into a dense monoculture that prevents sunlight from reaching other aquatic plant life.  If allowed to spread, it will destroy habitat for invertebrates, fish and other wildlife.  Westfield Parks Invasive Plant Strike Team volunteers have been braving poison ivy to bring this plant under control on land.  Our hope is that the pond contractor will address the stand of phragmites australis in the water this fall.

Springtime Sunning on the Pond 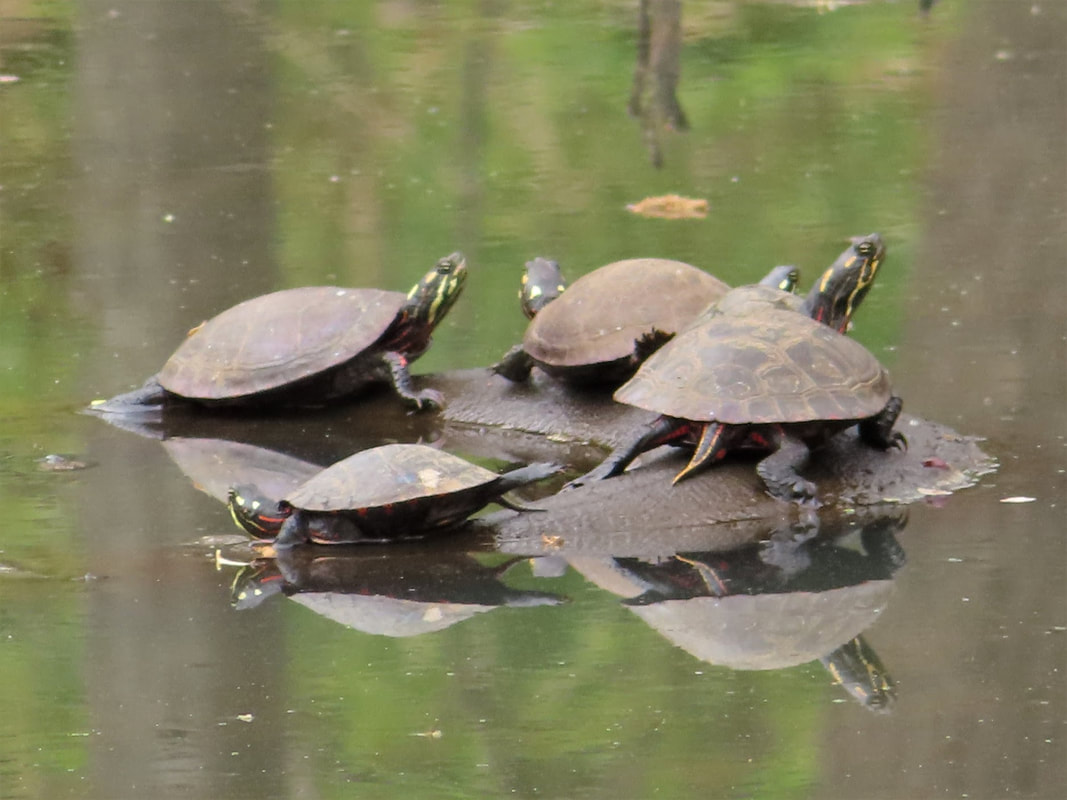 After a winter's hibernation, Brightwood's turtles have awoken! 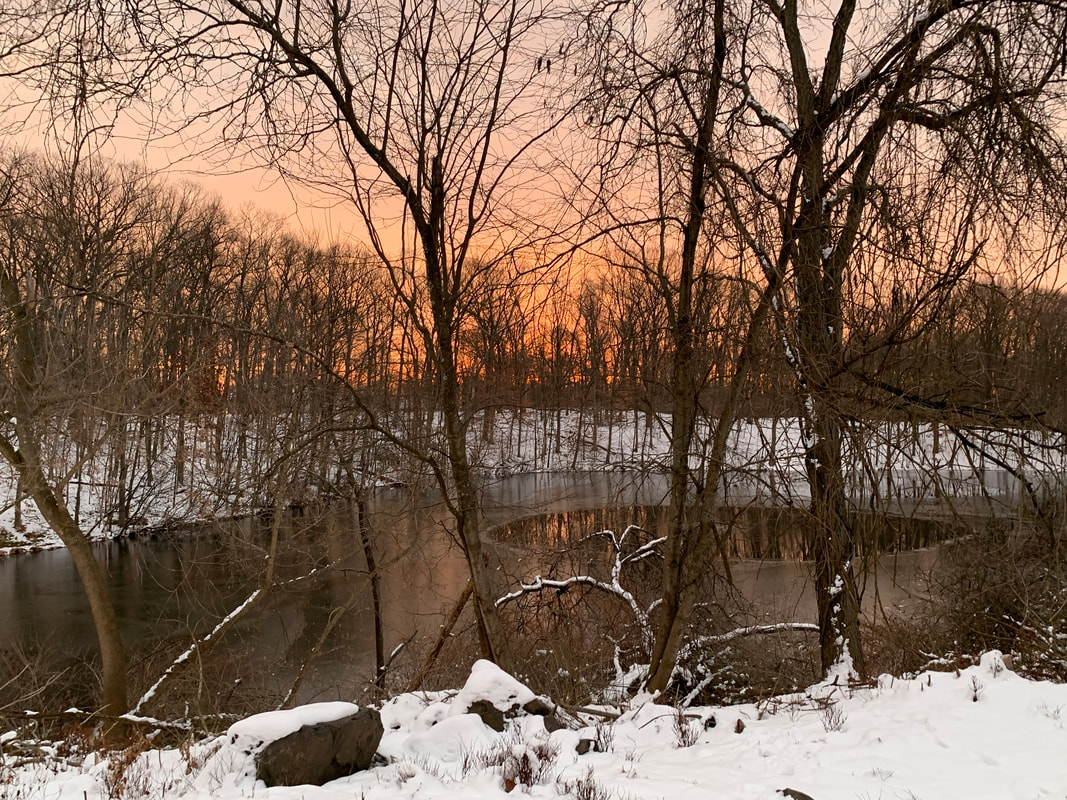 Brightwood Park, nestled in the middle of suburban neighborhoods, is a sanctuary for those seeking refuge from the surrounding bustle.  Water features are a centerpiece of the park's beauty and its ecological significance.  Most prominent among these is the pond that supports a wide variety of aquatic life, birds, and other animals.

Some might say that the pond is the driving force of nature in the park.  When a body of water is in good health, it sustains all life from insect to frog, fish to fisherman, or  bird to fox.  When poor water quality fails to support aquatic life, there is a rippling impact on the food chain.  Friends of Brightwood Park grew concerned about the park's pond health and advocated for improved monitoring and aeration.

​In the summer of 2021, the town recognized that the pond was in poor health due to dense overgrowth of duckweed on its surface.  Thankfully, the town has updated the aeration system and contracted to provide regular monitoring and treatment.  We are cautiously optimistic that these actions will have a beneficial impact on the pond's ecology into the future.

Since last Fall, six working bubblers have been aerating the water in the pond.  If you have walked in the park recently, you may have seen the water rippling in discreet unfrozen, circular areas.  Wintering  ducks and geese can be seen walking across the ice to reach swimming holes made courtesy of the bubblers.

Friends of Brightwood Park will continue to work towards a sustainable aquatic habitat. Our shoreline demonstration garden is designed to educate the public on what a healthy native plant shoreline should be.  Native plants along the shoreline support biodiversity and help absorb excess mineral run-off before it reaches the water.  We will be planting the gardens this spring.

FOBP invites you to follow our progress.  If you like what you see,  send us an email at FriendsOfBrightwood@gmail.com and join us!

Members of the Friends of Brightwood Park met with town officials recently and learned these updates.  The Town has employed Solitude Lake Management for a 6 diffuser aeration system (3 more than are currently in service);  installation is expected in a few weeks.  The Town's new contracts will include monthly testing, and treatment if necessary.  This is a very positive step towards maintaining a healthy pond ecosystem and we look forward to a beautiful AND healthy pond in 2022.

Great Blue installed new aerator heads yesterday - they were able to replace 3 of the 4 heads.  The 4th head line was pinned under a branch in the water and was unable to be retrieved so the DPW will schedule a time to get the 4th head replaced. Oxygen levels have improved to over 4 and we expect the levels to rise due to the new heads.

August 4, 2021
New Aerator Heads are Ordered; DEP Visits.  An Improved Management Plan is in the Works

Update;  The town has ordered 4 new aerators to be installed as soon as possible and is working on a way to take a more proactive,  approach to the management of the pond.  DEP has been consulted and has visited.  We appreciate the quick action by the town and look forward to contributing to a plan that would lead to a much healthier pond in the future.

August 1, 2021
Fish Kill at Brightwood
Duckweed is a fast growing, free-floating aquatic plant that inhibits oxygenation of the water, leading to oxygen levels in the pond that are too low for fish to survive.  Low oxygen levels also prevent proper herbicide treatment to prevent the duckweed’s proliferation.  Without treatment, the duckweed spreads a thick layer over the pond’s surface exacerbating the problem.

In May, the town’s pond contractor, Great Blue, Inc., measured the oxygen level in Brightwood pond at 5.0 ppm.  The healthy range for oxygen is 5.0 to 12.0 ppm.  As such, the oxygen was at the bottom of the healthy range at that time.  By July 27, duckweed had formed a dense cover over the water resulting in anoxic conditions.  The oxygen level had dropped to 0.6.  Fish begin dying off at 0.4.

Great Blue was left with a conundrum.  If it did nothing, the oxygen levels would jeopardize aquatic life due to the dense duckweed cover.  An herbicide treatment would cause the duckweed to  die off.  However, a sudden die off of aquatic plants can cause a rapid decline in dissolved oxygen in the water.    Great Blue chose to do a partial treatment of the herbicide Clipper to the section of the pond extending from the island to the bank closest to Prospect St.  The  herbicide was sprayed on the surface of the duckweed with a surfactant to ensure that the herbicide adhered to the plant.
​
The town’s pond contractor applied Clipper to the pond on July 27, 2021.  Sadly, by July 30, 2021, there was a large fish kill.  FOBP members witnessed dead fish floating at the surface, fish struggling for the last breath of air, and fish grouping at the mouth of the tube where water flowed from the small pond to the big one.  The impact of a fish kill reverberates up the food chain reducing the food source for turtles, herons and other animals.  As of today, the oxygen level has improved to 1.2 ppm - still well below the 5 to 12 ppm required to maintain a healthy ecosystem.

Great Blue acknowledged that the diffusers presently in the pond may not be operating sufficiently to oxygenate the water.  It seems that about $2,000 give or take would be the price tag if extensive replacement tubing is not required.  This is a stop gap measure only.  Better aeration would likely be achieved if six diffusers were used.  The overall cost might be somewhere around $10,000 - ballpark figure.   Replacement of the current diffusers could be done immediately.  Installation of a full set of six diffusers could not be done until October.  If the four are replaced now, they could be utilized if the upgraded system were put in later.

FOBP urges the town to move with haste to address the pond’s aeration system.